c2c is a British train operating company owned by National Express Group. It has operated the London, Tilbury & Southend passenger franchise since May 1996 and became the operator of the replacement Essex Thameside franchise from November 2014.

The name c2c doesn't mean anything specific. In a sense it can mean anything you want it to. Its uniqueness reflects the young, vibrant character of the people we serve. c2c could stand for coast to capital, or capital to coast. From our point of view, one of the most important things it stands for is commitment to customers.

c2c operates services on the London, Tilbury and Southend Railway line from London Fenchurch Street to the northern Thames Gateway area of southern Essex, including Grays, Leigh-on-Sea and Southend-on-Sea. The main route from Fenchurch Street to Shoeburyness is 39.5 miles (63.57 km), with a fastest timetabled journey time of 58 minutes[17] giving an average speed of 40.7 mph, although the route can be done in 47 minutes, an average speed of 50 mph.[18] The line has a speed limit of 75 mph (121 km/h), although the Class 357 Electrostar trains are capable of 100 mph (160 km/h). 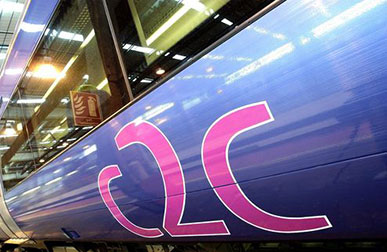