CrossCountry is a train operating company in the United Kingdom owned by Arriva UK Trains, operating the New Cross Country franchise. It operates many intercity and other long-distance trains in the UK which do not serve Greater London, including the UK's longest direct rail service from Aberdeen in the north-east of Scotland to Penzance in Cornwall, in the south-west of England.

It is one of only two franchised train operating companies that does not operate any stations. All routes call or terminate at Birmingham New Street.

Covering over 1,400 route miles and calling at over 100 stations – stretching from Aberdeen to Penzance, Bournemouth to Manchester and Stansted to Cardiff, CrossCountry crosses more of the country than any other train company. CrossCountry’s passengers are a mix of commuters, business and leisure travellers. 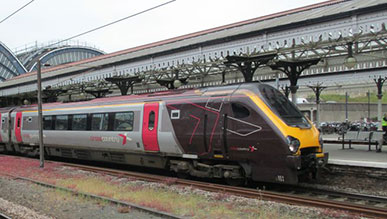