Gatwick Express is a high-frequency rail passenger service between London Victoria and Gatwick Airport in South East England. It is the brand name used by the Govia Thameslink Railway train operating company on the Gatwick Express route of the Thameslink, Southern and Great Northern franchise.

The service began in May 1984 with air-conditioned InterCity carriages operated by British Rail. When it was privatised in April 1996, National Express took over the franchise. In June 2008, Gatwick Express ceased to exist as a separate franchise, when it was merged into the Southern train operating company, although it continues to maintain its own identity. In July 2015, Southern and Gatwick Express were merged into Govia Thameslink Railway. Alternate off-peak Gatwick Express services now continue non-stop beyond Gatwick Airport to Brighton. 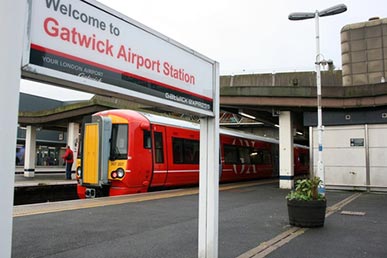