It is a subsidiary of Arriva UK Trains, which has been owned by Deutsche Bahn since 2010.

Grand Central connects Yorkshire and the North East to London with two routes.

Five daily services on the North East to London route run between Sunderland and London King's Cross calling at Hartlepool, Eaglescliffe, Northallerton, Thirsk and York. This route is known as the "North Eastern service".

Four daily services which run on the Yorkshire to London route operate between Bradford Interchange and London King's Cross calling at Halifax, Brighouse, Mirfield, Wakefield Kirkgate, and Doncaster. Some services also call at Pontefract Monkhill. This is known as the West Riding or "West Yorkshire" service. 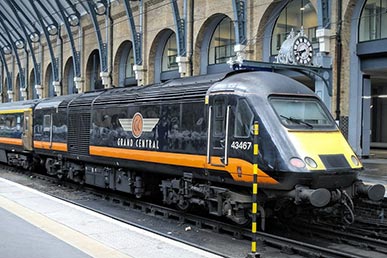