Merseyrail is both a train operating company (TOC) and a commuter rail network, in Merseyside, England. It is a part of Serco-Abellio, and is formed of two electrified lines of the National Rail network known as the Northern Line and the Wirral Line which run underground in central Liverpool. A third line, separate from the electrified network, is known as the City Line, though this is an informal term used by governing body Merseytravel to refer to local services it sponsors on the Liverpool to Manchester Lines and Liverpool to Wigan Line operated by Northern Rail.

The Merseyrail (electric) network has 67 stations and 75 miles of route, of which 6.5 miles are underground. Carrying approximately 110,000 passengers each weekday,[3] they form one of the most heavily used railway networks in the UK outside London. It is operated by a joint venture between Serco and Abellio, which took over the franchise from Arriva Trains Merseyside in 2003, winning a 25-year contract. It operates a fleet of 59 trains and employs 1,200 people. 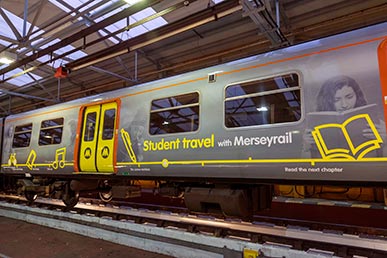