Abellio Greater Anglia is owned by Abellio (a subsidiary of Nederlandse Spoorwegen operating the Greater Anglia franchise. It provides the majority of commuter/regional services from its Central London terminus at London Liverpool Street to locations throughout the East of England.

The fracnhise covers services to Essex, Suffolk, Norfolk and parts of Hertfordshire and Cambridgeshire as well as many other regional routes. Abellio Greater Anglia also operate the Stansted Express airport rail link between London Liverpool Street and Stansted Airport.

Greater Anglia is part of a wider transport group, Abellio Transport Holdings, who also operate the ScotRail franchise and Merseyrail concession, East Midlands Railway, West Midlands Railway, plus bus services in London and Surrey. We are owned by ‘NS’ in the Netherlands who operate the rail services, stations and facilities on much of the Dutch network so are well placed to bring real improvements to your services. Department for Transport (DfT) awarded a further contract for Greater Anglia to operate services until 2025. 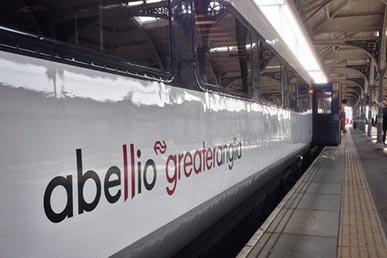