National Express is the largest coach company in the United Kingdom carrying over 18 million passengers every year. Operating in Scotland, England, Wales and between nearly all major cities and many towns, villages, airports and ferry terminals in the UK. 550 National Express coaches are running on UK roads everyday covering over 195,000 miles each day - the equivalent of travelling to the moon 297 times over the course of a year! From Portree, Skye in the far north of Scotland to Penzance almost 800 miles south over National Express serve around 1,000 destinations across the UK in total.

National Express operate coach services to all major UK airports 24 hours per day including Heathrow, Gatwick, Stansted and Luton as well as Birmingham and Manchester.

National Express has a 24 hour control centre that receives a GPS signal each coach every 30 seconds to update the centre on location, speed and the temperature inside the coach.

National Express Coaches are close to being 100% wheelchair accessible - years ahead of the legal requirement to do so. 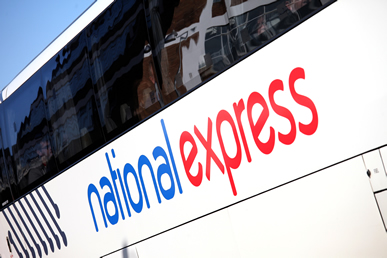